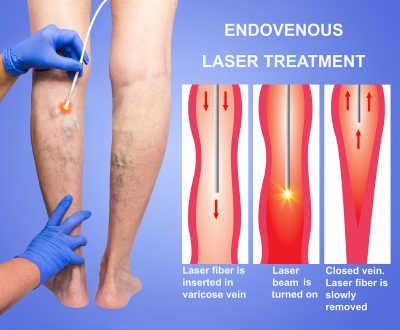 Chronic venous disease (spider veins, varicose veins, leg ulcers) is a common problem affecting the general population throughout the world. In India, it is estimated that around 25-30% of the population is suffering from such vein disease. The unfortunate part is that many aren’t aware of the disease and whom to approach for the right guidance and treatment.

Varicose veins are enlarged (dilated) and tortuous veins which are located just under the surface of the skin – usually on the leg and are cosmetically unsightly. Weak valves, which are unable to function optimally, are the basic reason for the formation of such varicose veins. Heredity, professions that involve prolonged standing hours (shopkeepers, teachers, policemen, etc), pregnancy, obesity – are some of the common reasons for weakened vein valves.

A doctor can use a laser treatment for varicose veins. A laser is a highly focused beam of light. The laser heat damages the wall of the diseased vein and turns the vein into scar tissue. After a year or so, the scarred vein disappears completely. The blood circulation is continued through the normal healthy veins, thereby curing the patient of various symptoms such as leg pain, swelling etc.

At Surekha Varicose Veins Clinic which is located in Dombivli – a suburb of Mumbai – vein disorders are treated using minimally invasive treatments such as Endovenous Laser Treatment (EVLT), Foam Sclerotherapy and CLACS (Cryo Laser and Cryo Sclerotherapy). Every patient is different and each has findings that require specific treatment for relief of symptoms and correction of vein problems. A single treatment or a combination of the minimally invasive approaches may be necessary.

Varicose veins are traditionally treated by open surgery – Trendelenburg operation – which involves ‘stripping’ of the vein with or without perforator ligation depending on the pathology. EVLT (Endovenous Laser Treatment) offers a safe, easier, less morbid, and cosmetic alternative to open surgery. Discretion, however, is warranted in case selection. Venous Colour Doppler (ultrasonography of the leg veins) is the gold standard to evaluate varicose veins and is mandatory prior to the laser treatment. EVLT is painless, scarless, and has better results as well. The patient can also resume routine activities in 24 hours! There are no or minimal complications involved in the laser treatment for varicose veins. Another major advantage of laser treatment is that, in patients with bilateral varicose veins, both limbs can be treated at the same time; in surgery, one has to wait 3 months before treating the second limb.

Surekha Varicose Veins Clinic now offers the CLACS procedure – Cryo Laser and Cryo Sclerotherapy. CLACS is a revolutionary treatment for spider veins and small varicose veins (less than 3mm diameter) of the leg. The technique was pioneered by Prof. Dr Kasuo Miyake of Sao Paulo, Brazil in 1999. Over the years, CLACS has been used to treat thousands of patients with extremely good and long-lasting results. Now done in nearly 30 countries around the world, Surekha Varicose Veins Clinic is the first centre in India to introduce this novel, state-of-the-art treatment. CLACS is a painless, ‘walk-in, walk-out OPD procedure. There are no specific precautions after treatment. A patient may return to work and usual activities within 4 -6 hrs. Exercise is permitted as well after 24 hrs.

Prevention is better than cure :-

Unfortunately, the varicose vein is a disease caused due to valve degeneration and subsequent valve weakness. No matter what procedure you choose, it can only treat the existing varicose veins. Once treated, the chances of the diseased vein resurfacing are extremely rare but the valves in other veins may develop weakness over a period of time. This too has a low probability, especially after the forties and in women after the childbearing age has passed by. One can, however, take the following precautions which can keep the leg veins healthy –