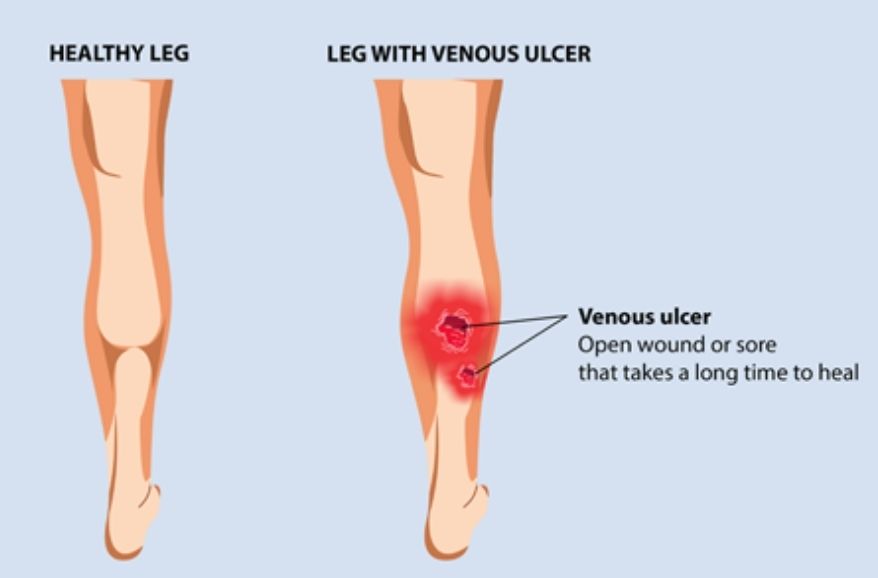 A leg ulcer is a break in the skin that can occur anywhere on the leg, from the foot to the hip. Ulcers are most commonly found on the inside of the leg, just above the ankle. They can also occur on the outside of the leg, just below the knee. Leg ulcers are usually caused by poor circulation or by injury to the leg. Poor circulation can be caused by many things, including diabetes, obesity, and heart disease.

Older people are at greater risk, and women are more likely to develop leg ulcers than men because women tend to have longer lifespans. Usually, somebody in the absence of an injury will recover quickly within a couple of weeks. However, in some circumstances, if the underlying issue is not treated, the damaged area will increase in diameter then chronic leg ulcer is detected.

Leg ulcer’s common cause is related to veins, when the veins in your legs don’t get enough blood supply then it can eventually lead to a leg ulcer.
Here are some of the listed causes of leg ulcers:

In some cases, leg ulcers are the cause of untreated varicose veins, although ageing, the probability of suffering from leg ulcers will increase with age. They’re often heredity-based as well; for example, if you had before–your parents experienced leg ulcers, you’re at higher risk of getting them as well.

Ulcers are often painful, but sometimes they do not contain any pain. This is typical because impairment of the nerve causes nerve damage. The improvement of pain in people who do not realize the symptoms of an ulcer is another reason why easy ulcers might be misdiagnosed.

If you have any of the below symptoms consult a doctor immediately:

Preventive measures to keep in mind

As poor blood circulation is the most common cause it is necessary to keep in mind to control the condition that can cause poor blood circulation such as Hypertension and Diabetes, along with that we should also consider maintaining a proper diet, eating fresh and not processed food and the most important thing is to reduce your sodium intake.

Often, treating leg ulcers is acceptable in alleviating the symptoms they cause. The reason for this is that the symptoms aren’t given an adequate amount of time to be relieved if they’re not treated in a timely manner. In the event the ulcers aren’t treated early, it’s possible for an infection to form (and spread) to the bone. It’s critical that you speak with your doctor as soon as you begin to experience pain.